UBJ Hotels Inc. is a Pemecutan-based hospitality company that manages 4 main brands of hotels and resorts across the nation. The company was established in 1999 after a merger by 3 former hospitality companies. The company primary businesses are hospitality and tourism. It also has 2 subsidiaries that focused on tourism accommodations, UBJ Travelista Company and Jepun Wellness Center

D'Uma Hotel Corporation was first established in 1974 by Wayan Pande Subrata. The first hotel was built in Tulangampiang. The company established another 7 hotels for the next 25 years of its operation. Most of their properties were located in Pemecutan with one of them located in Soracana Islands.

In 1978, Made Sudirga established The Bale Hotelier, a hospitality company centered in Jematang. The main brand, The Bale have 6 branches that are located in Pemecutan and Soracana Islands. The second brand, La'Casa Hotel was established in 1989. It only has 3 branches in Ulunusa before the merger.

A marriage couple, Pande Surya Beratha and Ni Luh Ayu Saraswati, established Jineng Ayu Hotel Company in 1980. The company's first hotel was build in Ubung which also become their headquarter. Across their 19 years of operation, the company build 9 branches in the nation and also in Soracana Islands.

Pemecutan went into a financial crisis in 1997-1998. The crisis also affected the country's tourism industry. This situation that made 3 hospitality companies merged together to avoid bankruptcy. The merger was finalized in 31 August 1999 with the establishment of UBJ Hotels Inc. All the properties under the previous 3 companies were being re-branding after the management changed. During the merger, the second brand of The Bale, La'Casa Hotel was intended to be sold in near future but eventually the assets under La'Casa Hotel was entered a major re-branding in early 2000's. EcoZen Boutique Hotel is the re-branding name of La'Casa Hotel which was relaunched in 2006.

Beginning 2007, UBJ Hotels begin its expansion again. They started a new project mostly located in Kanginan which they are lacked of operation before. And some addition in Soracana Islands. In June 2020, UBJ Hotels engage a partnerships with Bluethorn Hotel Group to establish a new line of brand that focusing to business travelers but also accommodates families. With equal equities hold by them, the new brand will be known as Focus by UBJ Bluethorn. As Soracana Islands is being annexed by Pemecutan in August 2020, all UBJ Hotels properties that are located in Soracana Islands are unlisted from their overseas properties list.

D'Uma Hotel & Resorts is an upscale luxury brand hotel under UBJ Hotels. The brand characterize with high quality amenities, full service accommodations and restaurants and high level of professional services. Currently there are 8 properties under the brand with the 9th property will be build in Mitra, Eraman. It will be the first overseas property under this brand after the unlisted properties of Soracana Islands.

The Bale Hotels are upscale full-service brand under UBJ Hotels. It is consider a second class brand which aimed to mid to upper class tourists. The brand characterize with a wide array of facilities which can be vary based on its location. Currently there are 8 properties under the brand. All of them located in Pemecutan.

Jineng Hotels or previously Jineng Ayu Hotels is one of the three first brand of UBJ Hotels. The brand was re-branding after the merger and change its name into its current name. Jineng Hotels is also an upscale full-service brand which aimed for mid and upper class tourists. Currently there are 11 properties under the brand with the latest are opened in Pasahnehu, Soracana Islands. 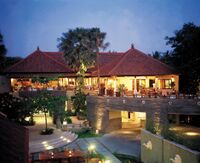 The brand was previously known as La'Casa Hotel. It was the second brand of The Bale Hotelier. The brand was intended to be sold or scrapped after the merger but it is getting a huge re-branding. La'Casa Hotel is re-launch as EcoZen Boutique Hotel in 2006. The brand aimed for middle class tourists with a unique and intimate setting and full service accommodations. The brand cater a smaller size of guests with around 100 rooms for each properties. The brand adopted eco-tourism concept. Currently there are 7 properties under the brand. The 8th property will be build in Mengwi.

Focus by UBJ Bluethorn is a brand of hotels owned by Bluethorn Hotel Group and UBJ Hotels. They are a mid-priced range of hotels designed for business travelers but also accommodates families. The brand has an intimate and relaxing setting with full service accommodations. The facilities that offer by the brand may vary depended on the location of the hotel. There are 2 future projects under this brand in Pasirpura, Eraman and Tambapuri, Pemecutan.

Retrieved from "https://melayu.miraheze.org/w/index.php?title=UBJ_Hotels&oldid=1574"
Categories:
Cookies help us deliver our services. By using our services, you agree to our use of cookies.